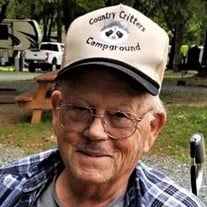 Mr. Richard R. Bennett, 78, of Peru, passed away peacefully at home on Sunday, December 6, 2020, surrounded by his loving family. Born in Pittsfield, MA, on April 3, 1942, the son of the late Robert and Dorothy Kent Bennett, he graduated from Pittsfield High School Richard was a Vietnam War veteran. He enlisted in the United States Navy in 1961 where he proudly served his country until 1964. For much of his career, Richard worked as a farmer. While Richard was a longtime resident of Peru, in 2008 he and his wife established a home in Tennessee, where they resided for the winters. Regardless of where he was, Richard was always an active participant of his society. He was a member of many organizations, such as the Grand Ole Hatchery and the Back-Stage Opry, both of Tennessee, as well as the Massachusetts Country Music Association. He was a member of the local Hinsdale Congregational Church, and The United Methodist Church of Tennessee. He was also a member of the choir of the United Methodist Church in Savannah, Tennessee and in Dickinson. Besides his beloved wife of nearly 50 years, the former Janet Brooks, whom he married on June 5, 1971, Richard is survived by his children, Kimberely Windoloski, Melinda Buda her husband Brent and Sandra Bayo and her husband Nouridine. He leaves five grandchildren, Nichlaus Bennett, Courtney Buda, Austin Buda, Nourat Bayo, and Amira Bayo as well as four great grandchildren, Bryon, Alisheahna, Madisyn, and Carson. Richard is also survived by his dog (and companion) Sassy. Richard was predeceased by his sister, Eileen Bennett Kenyon, and his son in law Tommy R Windoloski Funeral Notice: A celebration of life for Mr. Richard R. Bennett will take place at his family’s residence in the spring, when Covid restrictions are lifted and all can safely gather together. In lieu of flowers, donations can be made to Soldier On in care of the Dwyer-Wellington Funeral Home, 525 Main Street, Dalton, MA 01226, in his memory. Donations CANNOT be made online, but may be made through the Dwyer-Wellington Funeral Home.

Mr. Richard R. Bennett, 78, of Peru, passed away peacefully at home on Sunday, December 6, 2020, surrounded by his loving family. Born in Pittsfield, MA, on April 3, 1942, the son of the late Robert and Dorothy Kent Bennett, he graduated from... View Obituary & Service Information

The family of Mr. Richard R. Bennett created this Life Tributes page to make it easy to share your memories.

Send flowers to the Bennett family.