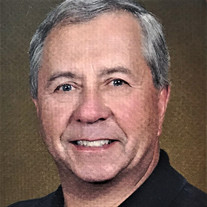 Mr. Richard “Dick” E. DiOrio, 74, of Hinsdale, passed away peacefully at his home on Friday, January 22, 2021 surrounded by his loving family after a courageous battle with Parkinson’s disease. Born in North Adams, MA, on August 15, 1946, the son of Raymond and Dorothy (Dunsmore) DiOrio, he graduated from Pittsfield High School. Richard worked as a lineman and supervisor for Western MA Electric Company (Northeast Utilities) for 46 years. Work was a big part of his life. He enjoyed all aspects of his job from the camaraderie of the lineman to organizing a storm plan and everything in between. He enjoyed the work so much; overtime was never turned down. Richard’s life was rich in family, friends, and good times. He enjoyed the outdoors, and his hobbies of canoeing, hiking, biking, pheasant hunting and being a car and motorcycle enthusiast. He was a member of Berkshire Nautilus for over 30 years. He took pride in his home projects as well as helping friends and family with theirs. We imagine now he is talking with his father, rollerblading with his sister, and walking through the woods with his dogs: Shannon, Remy, and Orvis. Richard was a devoted husband, father, son, brother, uncle, and friend. He is survived by his beloved family; his wife of 50 years, the former Kathy Bailey, whom he married on October 17, 1970; and his mother, Dorothy DiOrio of Pittsfield, MA. He also leaves behind his son, Brian DiOrio, and partner, Elizabeth Ingenito, of Hinsdale, MA; and daughter, Kelly (DiOrio) Lange and her husband, Paul Lange, of Dalton, MA, three granddaughters, Sophia DiOrio, and Lauren and Brooke Lange. Richard is also survived by many good friends, family, and neighbors who will miss him dearly. Richard was predeceased by his father, Raymond DiOrio and sister, Marcia Cassavant. Funeral Notice: At this time, there will be a private service for Mr. Richard E. DiOrio. A celebration of his life will be held at a later date when Covid restrictions are lifted and all are able to safely gather together. In lieu of flowers, donations can be made to Michael J. Fox Foundation for Parkinson’s Research, Grand Central Station, PO Box 4777, New York, NY, 10163-4777, in his memory.

The family of Mr. Richard "Dick" DiOrio created this Life Tributes page to make it easy to share your memories.

Send flowers to the DiOrio family.