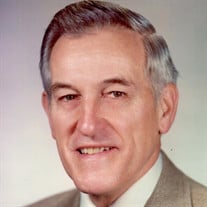 Richard B Fields, Sr., 98, of Pittsfield, passed away peacefully at Berkshire Medical Center on December 4, 2019 surrounded by his loving family. Born in Cleveland, OH, on March 7, 1921, the son of the late Ferdinand J. and Carolyn Spaulding Fields, he graduated from Pittsfield High in 1939. Dick worked at the Pittsfield Boys Club during high school and was a mechanic at the former Pittsfield Milk Exchange after graduation. In 1941, Dick began his 43 year career at General Electric Power Transformer which was interrupted by his World War II enlistment in the United States Navy where he earned the rank of First Lieutenant and served as a Navy Flight Instructor for 4 years. After the war, Dick continued his career at GE, where he retired in 1984 as a Production Control Manager. Dick was a communicant of Sacred Heart Church where he was a tenor in their choir for over 60 years. He was a member of the GE Quarter Century Club and the GE Pensioners. He enjoyed wood working, working on his cars and his yard. Most important to him was spending time with his wife and family. He was predeceased by his beloved wife of 46 years, Doris E. Smith, who he married on May 21, 1949 and his daughter Catherine who died as an infant. He is survived by his daughter Carolyn (Timothy Grimes) and sons, Richard Jr. and James (Joan) with whom he resided and 8 grandchildren (Kevin Grimes (Elizabeth), Emily (Thomas Wood), Michael Grimes (Emily), Jeremy, Jason (Alicia), Ryan, Jeffrey and Maureen) and 10 great-grandchildren. The family would also like to thank Missy Harrington who provided cheerful and caring daily assistance in his last months. Funeral Notice: Funeral services for Mr. Richard B. Fields, Sr. will be Tuesday, December 10, 2019 with a Liturgy of Christian Burial at 10 am at Sacred Heart Church, 191 Elm Street, celebrated by the Rev. Frank Lawlor. Burial will follow in St. Joseph Cemetery. Calling hours will be Monday evening, December 9, from 4 pm until 7 pm at the Dwyer Funeral Home, 776 North Street, Pittsfield, MA. In lieu of flowers, donations can be made to the Boys & Girls Club of the Berkshires in care of the Dwyer Funeral Home, 776 North St., Pittsfield, MA 01201 in his memory. Donations CANNOT be made online, but may be made through the Dwyer Funeral Home.

Richard B Fields, Sr., 98, of Pittsfield, passed away peacefully at Berkshire Medical Center on December 4, 2019 surrounded by his loving family. Born in Cleveland, OH, on March 7, 1921, the son of the late Ferdinand J. and Carolyn Spaulding... View Obituary & Service Information

The family of Mr. Richard B. Fields Sr. created this Life Tributes page to make it easy to share your memories.

Richard B Fields, Sr., 98, of Pittsfield, passed away peacefully...

Send flowers to the Fields family.