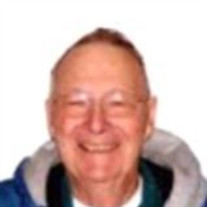 Richard Drum Knight, 91, died Friday, February 11, 2022 at the Woodridge Nursing Home in Berlin. He was a long-time resident of Richmond, Massachusetts. He was born in Stockbridge, Massachusetts on May 6, 1930, the son of, Clark & Estella (Drum) Knight. He is a graduate of Pittsfield High School in Pittsfield, MA, class of 1948. Richard was a United States Navy veteran serving during the Korean War, from 1948, until his honorable discharge in 1952. He married his high school sweetheart and the love of his life, JoAnn Pilsbury on June 20, 1953. JoAnn predeceased him June 23, 2019. Much of Richard's career was in the management side of the telecommunications business, having worked for many years for New England Telephone and Telegraph in Pittsfield, Massachusetts. He was a lifelong and active member of the First United Methodist Church in Pittsfield, MA, where he sang in the choir and he was youth leader, along with his wife, for many years. Richard also led a community junior achievement group. He and his wife, loved to go bowling and square dancing. They bowled right into the twilight years of their lives. Surviving family include two children, William R. Knight and his wife, April of Stowe, VT and Dorla Leone and her husband, Kenneth of Moretown; five grandchildren; nine great grandchildren; and many nieces and nephews, He is predeceased by his wife, JoAnn; daughter, Cinda K. Wilson; special brother in-law, Chandler Pilsbury; and three brothers and three sisters. Funeral Notice: Funeral services for Richard Drum Knight will be Wednesday, April 20, 2022, at 12 noon at the Dwyer-Wellington Funeral Home, 220 East St., Pittsfield, MA. Burial with full military honors will follow at Richmond Center Cemetery. There will be an hour of visitation at the funeral home prior to the service, from 11 am to 12 noon. Local assistance to the family provided by Kingston Funeral Home in Northfield, VT. In lieu of flowers, donations may be made in his memory to the First United Methodist Church, 55 Fenn St., Pittsfield, MA 01201 or Woodridge Nursing Home Activity Fund, 142 Woodridge Road, Berlin, VT 05602.

Richard Drum Knight, 91, died Friday, February 11, 2022 at the Woodridge Nursing Home in Berlin. He was a long-time resident of Richmond, Massachusetts. He was born in Stockbridge, Massachusetts on May 6, 1930, the son of, Clark & Estella (Drum)... View Obituary & Service Information

The family of Richard Drum Knight created this Life Tributes page to make it easy to share your memories.

Send flowers to the Knight family.