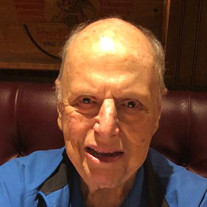 Robert “Bob” J. Avalle, 90, passed away on Friday, January 3, 2020 at Heather Heights Senior Living Community in Pittsford, NY. Born in Pittsfield on November 28, 1929, the son of the late Natale and Anna McCarthy Avalle, he graduated from Pittsfield High School in 1947. After graduation, Robert enlisted in the United States National Guard, where he proudly served his country from 1947 until 1950. Bob began working at General Electric in 1947, where he held various jobs in manufacturing operations, and was named Manager of Data Processing Operations in 1972. He worked for GE for over 40 years until his retirement in 1989. He was predeceased by his wife Veronica Butrymowicz Avalle of Pittsfield, who died on April 1, 2014. They were married in St. Joseph’s Church on September 14th, 1957. He is survived by their three children, Robert J. Avalle, Jr., of Watertown, MA, Maureen A. O’Neill (Daniel) of Fairport, NY, and Diane M. Werth (Alexander) of Hampden-Sydney, VA, and their grandchildren: Meaghan, Brenna Rose, and Terrence and Shri O’Neill, and Colin and Gwendolyn Werth. Bob is also survived by his two sisters, Madeline Avalle Borden of Las Vegas, and Kathleen Avalle Kildoo of Escondido, CA, and was predeceased by his brother Daniel Avalle. He is survived by many cousins, nieces, and nephews, and shared a special bond with his dear cousin Norma Gardino. Of his many close friends, Bob especially wanted to acknowledge the late Paul Gould. As a child Bob lived in and around New York City, particularly the Bronx and Yonkers, NY, where he became a lifelong New York Yankees fan. He moved back to Pittsfield at age 13. He attended St. Francis Catholic Church of Pittsfield for most of his life and sang in the choirs of St. Francis and St. Mark’s for many years. Gifted with a beautiful tenor voice, he enjoyed singing at many weddings of family and friends. Over the past 20 years Bob spent his winters living in Cocoa and Melbourne, FL, where he had many dear friends. He was an avid golfer who played in many golf leagues in Pittsfield and Florida. He loved crossword puzzles and playing Scrabble, and was fond of puns and corny jokes which he delighted in sharing with others, especially his whole family, who knew him as Papa. Bob very much enjoyed helping others. He was the Vice President of the Berkshire County Retired and Senior Volunteer Program (RSVP) Advisory Council for six years (1998-2003), and was honored with their Volunteer of the Year Award in 1997. He volunteered at numerous locations including Meals on Wheels and the Christian Center of Pittsfield. He also worked as a volunteer at the Sugar Hill Senior Living Community, where he spent every day in the last years of his wife Veronica’s life and devoted himself to her care. Bob’s family is grateful for the care he received this past year from many caregivers at Heather Heights. Bob was born on Thanksgiving Day and was thankful to recently celebrate his 90th Birthday (also on Thanksgiving) in Fairport, NY, where, as Papa, he was surrounded by his three favorite things: good food, good friends, and all the loved ones in his family. Funeral Notice: Funeral services for Robert J. Avalle, Sr., will be held in the Spring of 2020, a notice of which will be publicized at a later date in the Berkshire Eagle. In lieu of flowers, memorial donations can be made in honor of Bob’s grandson Colin Werth to Parent Project Muscular Dystrophy, in care of the Dwyer Funeral Home, 776 North St., Pittsfield, MA 01201. Donations CANNOT be made online, but may be made through the Dwyer Funeral Home.

The family of Mr. Robert "Bob" J. Avalle created this Life Tributes page to make it easy to share your memories.

Send flowers to the Avalle family.