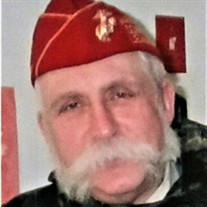 Robert “Bob” J. Rhodes passed away suddenly at home on April 3, 2021. He was born in Dickinson, ND, on March 13, 1945, to Amelia A. and Robert M. Rhodes. Bob was a graduate of Pittsfield High School, class of 1962. He went on to attend Texas Wesleyan College in Fort Worth for 3 years when it became a matter of being drafted. He chose to enlist in the Navy and served as a Corpsman in the Naval Hospital in San Diego, California. In 1970-71, Bob served in Vietnam with the 1st Regiment, 1st Marines Division as a Navy Hospital Corpsman. Upon return from active duty, he transferred to the Naval Reserves and was called back to active duty for 5 months during Operation Desert Shield/Storm. Bob completed his educational degree, graduating from the University of Massachusetts in 1974. Bob had a great love and respect for the military and when invited to join the Local Marine Corps he became known as “Doc” to his buddies. Bob marched to the beat of his own drum, continuing with education courses and working along the way. He had employment at Jiminy Peak, was a substitute teacher in Pittsfield, a caregiver, and worked in retail before retiring. Survivors include his sister and brother-in-law, MaryEllen and John Pariseau of Dalton; nephews, Stephen Wichmann of Johnson, VT, Christopher Wichmann of Pittsfield and their families; niece, Stephanie Pogorek and family of Millbury, MA. Also, to be noted are some cousins who remained very close, Corinne Hagan of Simpsonsville, KY; James Olsen of Santa Fe, NM; and Emily and Edward Ptak, of Pittsfield. Funeral Notice: An outdoor memorial recognition of Bob’s life will be held on Sunday, June 6, 2021 at 1 p.m. at the Unity Terrace at Dwyer-Wellington Funeral Home, 220 East Street, Pittsfield, MA 01201. In lieu of flowers, donations can be made to Toys For Tots in care of the Dwyer-Wellington Funeral Home, 220 East Street, Pittsfield, MA 01201, in his memory. Donations CANNOT be made online, but may be made through the Dwyer-Wellington Funeral Home.

The family of Mr. Robert "Bob" J. Rhodes created this Life Tributes page to make it easy to share your memories.

Send flowers to the Rhodes family.