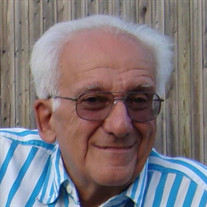 Mr. Robert A. Bruno, Sr., 78, of Pittsfield, passed away as a result of a motorcycle accident on Saturday, August 24, 2019. Born in Pittsfield, MA, on September 21, 1940, the son of the late George and Celia Russo Bruno, he graduated from Pittsfield High School in 1958. Shortly after graduating, Robert enlisted in the United States Air Force, where he proudly served his country. Robert worked as a self-employed contractor for most of his career. Robert loved spending time outdoors. It was there he could be found enjoying some of his favorite pastimes, such as gardening, hunting, fishing, and riding his motorcycle. Robert also liked taking trips to the casino and collecting antiques. In addition, he cherished his family as well as the time he spent with them. Besides his beloved wife Shirley A. Maxwell Bruno, whom he married on September 5, 1981, Robert is survived by his children; Michele Barile (Joseph Sr.) of Greensboro, NC., Robert A. Bruno Jr. (Stephanie) of Naugatuck CT., and Jennifer Bruno (Jim Wachner) of Oxford, CT.. He also leaves behind his grandchildren; Tia Barile, Joe Barile, Jr., and Sara Barile of NC.; Anthony & Nicholas Bruno; Baylee and Jack Fairhurst; and his step-grandchildren, Madison and Austin Wachner of CT. In addition, Robert is survived by his great grandchildren; Addie and Ryland Barile; and his nephew, Aaron “AJ” Vittone, of Las Vegas, Nevada. He also leaves behind his brother-in-law; Tom Maxwell and nieces; Jennifer Maxwell and Kimberly Maxwell. Robert was predeceased by his sister, Beverly Vittone. Funeral Notice: Funeral services for Mr. Robert A. Bruno will be on Saturday, August 31, 2019 at 12 noon at the Dwyer Funeral Home, 776 North Street, Pittsfield, MA, with the Rev. Peter A. Gregory, Pastor, officiating. Calling hours will be held prior to the service from 10 a.m. until 12 noon. In lieu of flowers, donations can be made to the charity of your choice in care of the Dwyer Funeral Home, 776 North St., Pittsfield, MA 01201 in his memory. Donations CANNOT be made online, but may be made through the Dwyer Funeral Home.

Mr. Robert A. Bruno, Sr., 78, of Pittsfield, passed away as a result of a motorcycle accident on Saturday, August 24, 2019. Born in Pittsfield, MA, on September 21, 1940, the son of the late George and Celia Russo Bruno, he graduated from Pittsfield... View Obituary & Service Information

The family of Robert A. Bruno Sr. created this Life Tributes page to make it easy to share your memories.

Send flowers to the Bruno family.