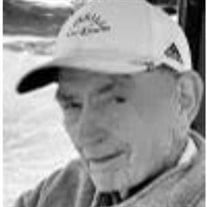 Robert “Bob” J. Fallon, 89, of Pittsfield, passed away, in his home, on Saturday, November 6, 2021. Born in Pittsfield, MA on April 2, 1932, the son of the late John “Babe” Fallon and Mary Kushi Fallon, he graduated from St Joseph’s High School with the class of 1950. Bob was predeceased by his beloved wife Pat, formerly Patricia Fitzpatrick, whom passed away in April of 1999. He is also predeceased by his son Bobby Fallon, daughters Maureen and Denise Fallon, and brother Shaun Fallon. He is survived by two children, Michael Fallon of Whitman Ma and Regina Fitzgibbons of Pittsfield Ma. Bob also leaves behind his brothers Tom and Denis Fallon, and his sisters in law Barbara, Annette, and Kathy Fallon. Bob will also be dearly missed by his grandchildren Katie, Julie, and Brian Fallon, his wife Jess, as well as Daniel and Liam Fitzgibbons and many nieces and nephews. Bob was proudly employed by General Electric for 40 years, as a draftsman, until his retirement in 1992. Among many things, he enjoyed golfing at the GEAA, competing in his dart leagues, spending time as a member of the Elks and The Knights of Columbus and socializing with his many friends. When he was not out and about, Bob could be found at his home, visiting with his dear neighbors, watching the hummingbirds in his garden and keeping in touch with his family across the globe. Funeral Notice: Funeral services for Mr. Robert J. Fallon will be Wednesday, November 10, 2021, with a Liturgy of Christian Burial at 11 a.m. at St. Mark’s Church, celebrated by the Rev. Christopher Fedoryshyn, Pastor. Burial will follow at St. Joseph Cemetery. There will be an hour of visitation prior to the service at the Dwyer Funeral Home, 776 North Street, Pittsfield MA 01201, from 9:30 a.m. to 10:30 a.m.

The family of Mr. Robert "Bob" Fallon created this Life Tributes page to make it easy to share your memories.

Send flowers to the Fallon family.