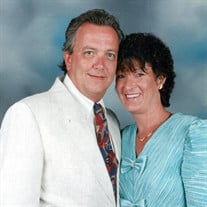 With the mournful strains of The Browns' "The Three Bells" resignating in the room, Robert Gilbert, 80, of Pittsfield, passed away on November 5th. A sad, yet beautiful end to an extraordinary life. Born into the loving arms of George and Angela Gilbert on April 5, 1941, Bob, our dad, was raised in the High Street section of Dalton with his neighbors and best friends Jimmy Coulter and Dave Smart nearby. Together they shared a quintessential 50's youth, soundtracked by the "first decade of rock and roll" as our dad would lovingly refer to it. 45 rpm singles of their favorite songs were collected, baseball cards were traded, and pinball was shot at Musante’s. The accordion was Bob’s instrument of choice, and he could be seen lugging it all about (and it wasn't small, or light.) This magical era and its music resonated and stayed with our dad all his life, through good times and bad. Bob was also a pretty fair golfer and in 1958 captured the Berkshire County Scholastic Championship at Wyantenuck, collecting a trophy for the win that he recently dusted off and put back on display. After graduating from Dalton High School in 1959 Bob joined the Air Force, where he trained as a morse code interpreter/interceptor. He was stationed in Okinawa and in Bangkok, where on off days he would golf but would try to "keep it out of the rough" due to the poisonous snakes lurking. Bob would return home to Dalton after four memorable years abroad and on a fateful night back in 1964 he met Dawn Ann Connelly at a dance, describing her as "the prettiest girl he'd ever seen." Soon they would marry, soon Bob would find work at GE Ordnance (he’s a numbers guy,) and soon they would start a family with sons Kirk and Glenn. In 1976 the family settled in the Yankee Orchard section of Pittsfield. Bob lived close enough to GE to walk to and fro, and often would, no matter the season. These were gold days for sure. Summers were spent at the beaches or the ballfields or in the backyard picnicking (Sox games on the transistor radio of course.) Nary a holiday or birthday went by without some kind of gathering or celebration. Whether it was candlepin bowling, polka dances, or travels far and wide, our mom and dad were lucky to have shared so many good times with so many good friends. Tragedy struck in 2014 when cancer took our mom. Our dad was utterly, and understandably devastated. It took him some time to pick up the pieces but something beautiful happened. He kept returning to his early years in a sort of blissful reminiscence, listening to his 50' music, and telling stories of bygone days. In some ways he was a kid again. We would be remiss if we didn't mention that our dad was a big Red Sox fan who happened to be in attendance at Fenway for the infamous one-game playoff in ’78 (yes, the “Bucky Dent game”,) and it was certainly gratifying for him to see what transpired in more recent history. Also worth a mention was that he loved going to the movies, as did his son Glenn. Together over the last seven years they had a weekly tradition of heading to the movies, including trips down memory lane to the drive-ins. There were some great films and some that were pretty bad, but it was always worth getting out. He leaves his two sons, Kirk and Glenn, their respective better halves Lori and Kari and one grandson he adored, Griffin. Special thanks to Dollie and Alissa and the whole crew at Home Instead for helping to keep our dad right where he wanted to be, at home. In keeping with our dad's wishes a private burial was held with family at St. Joseph's Cemetery. The third bell has rung for Robert Gilbert. What a life.

With the mournful strains of The Browns' "The Three Bells" resignating in the room, Robert Gilbert, 80, of Pittsfield, passed away on November 5th. A sad, yet beautiful end to an extraordinary life. Born into the loving arms of George and Angela... View Obituary & Service Information

The family of Mr. Robert G. Gilbert created this Life Tributes page to make it easy to share your memories.

With the mournful strains of The Browns&#39; &quot;The Three Bells&quot; resignating...

Send flowers to the Gilbert family.