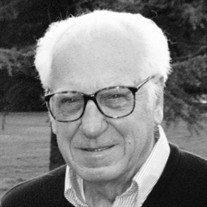 Mr. Roger N. Anderson, 98, of Pittsfield, Massachusetts, passed away on Wednesday, April 24, 2019. Born in Grand Rapids, North Dakota, on December 5, 1920, son of Adolph G. and Clara (Nielson) Anderson, he was a 1938 graduate of Grand Rapids High School. He attended the University of North Dakota, Grand Forks, North Dakota for two years (1938-1940). Following his World War II service, he received a bachelor’s degree in mechanical engineering in 1947. Mr. Anderson was a World War II Veteran serving for three years, including service with the 103st Infantry Division in the European Theater of Operations. In 1947, Mr. Anderson joined the GE Power Transformer division in Pittsfield, MA as a design engineer. In 1958, he was transferred to Locke Insulator in Baltimore, a division of GE, as a development engineer. He returned to the Pittsfield Power Transformer Department in 1960 and later transferred to the Ordnance Department. GE employed Mr. Anderson for 37 years, retiring in 1984 as planning coordinator for support system for submarine-deployed Trident 1 missile systems. Mr. Anderson was a member of Zion’s Evangelical Lutheran Church and had serviced on the Church Council and other church organizations. He and a fellow member transcribed selected records from the Parish Register and published these records as a master index that covered the period from 1859 to 2006. Books containing the transcribed records were published and provided to the Local History Department of the Pittsfield Library and to The Genealogy Society of Utah/Family Search. He was a member of the GE Pensioners Club, the former Stanley Club, a RSVP volunteer, the Pittsfield Senior Center, the Dalton American Legion, the Pembury Bridge Club and a member of the Berkshire Family History Association, serving as a member of their board of directors. Mr. Anderson was also a volunteer at the Silvio Conte National Archives, beginning his service shortly before its official opening in June 1994 and ending when that facility closed in 2011. One goal of the Conte Archives was to assist people in finding their deceased ancestors but he was helpful in finding the living mother of a client. In a holiday card to him, she wrote, “My Visit to the National Archives has changed my life.” He was a member of the Friends of the Conte Archives. He participated in their project of publishing A World War II Veteran Remembers. His war story was published on the Internet. He first married Madeleine E. Niemi, mother of his two sons, on December 5, 1947. He and his present wife, the former Marilyn (Clow) Person were married November 15, 1975. Besides his wife, he leaves two sons, Keith R. Anderson of Natick, MA and Brian R. Anderson of Lenox, MA; a step-daughter, Betsy Person; six grandchildren, Ryan, Brandon, Evan and Carey Anderson of Lenox, MA., and Emily and Kevin Anderson of Natick, MA; and his great-grand-daughter Ziva. His parents and brothers, Howard, Warren, and Kenneth preceded him in death. Funeral Notice: Funeral services for Mr. Roger N. Anderson will be Monday, April 29, 2019 at 11 a.m. at the Dwyer Funeral Home, with the Rev. Timothy Weisman, officiating. There will be a time of visitation before the service from 9:30 to 11 a.m. Burial with full military honors will follow at St. Joseph’s Cemetery. In lieu of flowers, donations can be made to Zion Evangelical Lutheran Church, his church for over 60 years, or a charity of one’s choice in care of the Dwyer Funeral Home, 776 North St., Pittsfield, MA 01201 in his memory. DONATIONS CANNOT BE MADE ONLINE, but may be made through the Dwyer Funeral Home.

The family of Mr. Roger N. Anderson created this Life Tributes page to make it easy to share your memories.

Send flowers to the Anderson family.