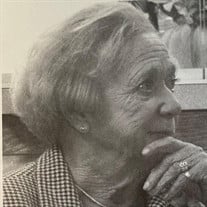 Rosaleen M. Miller passed away on August 15, 2021 at Kimball Farms Nursing Care Center where she had been a resident since August 5, 2019 Born in Liverpool, England in 1930, she was the middle of five children of William Finbar O’Sullivan, Mary Margaret O’Sullivan (Rowan) and later Rose O’Sullivan (Angus). Rosaleen is survived by her daughter, Catherine Demick and her son-in-law- Paul Demick of Lanesboro, her sister Anne Fearon of Liverpool, England, and many nieces and nephews and their children. Rosaleen was predeceased by her husband, B. John Miller, whom she married in June 1953 and who passed away in August 2016. She also predeceased by her son, Patrick Miller, who passed away in December 1999, her two brothers John and Donal O’Sullivan, and her sister Eileen Arrowsmith. Catherine and Paul wish to thank all the staff at Kimball Farms Nursing Care Center and HospiceCare in the Berkshires who were all so kind and compassionate with Rosaleen. They would also like to thank the staff at Pine Hill Assisted Living where Rosaleen resided for four years before transitioning to Kimball Farms. Funeral Notice: There will be no calling hours or funeral services for Rosaleen Miller. Donations, if desired, can be made to the Patrick Miller Substance Abuse Program, which is part of the Brien Center’s Child and Adolescent Services. The staff worked with the Millers to establish an endowment fund to provide stable financial foundation for the program. The program includes assessment, integrated mental health and substance abuse treatment, individual, group, and family therapy, and school-based prevention services. Donations CANNOT be made online, but may be made through the Dwyer Funeral Home.

Rosaleen M. Miller passed away on August 15, 2021 at Kimball Farms Nursing Care Center where she had been a resident since August 5, 2019 Born in Liverpool, England in 1930, she was the middle of five children of William Finbar O&#8217;Sullivan,... View Obituary & Service Information

The family of Mrs. Rosaleen M. Miller created this Life Tributes page to make it easy to share your memories.

Send flowers to the Miller family.