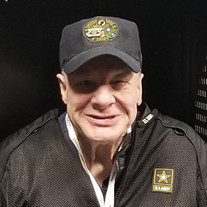 Mr. Roy M. Mullen, 70, of Pittsfield, was called home to be with the Lord on Thursday, April 22, 2021. Born in Raleigh, NC, he was the first son of the late Roy Lee and Hilda Marie Tucker Mullen. Roy, who liked to go by Mike, was a Vietnam War veteran. He enlisted in the United States Army in 1968, where he proudly served his country from Germany to Texas, until 1974. After his time in the military, he worked as a computer software developer for several companies in the Dallas, TX area and Springfield, MA area. He retired around 1994 as a Technical Computer Instructor. Among many things, Roy enjoyed being a part of the VA system and assisting or supporting veterans from Leeds to Pittsfield, where he resided. He loved to read and watch movies. Most of all he loved spending time with his daughter and granddaughter. Many day trips were taken with them in the Pittsfield, Berkshire area, which he always looked forward to. One of the more important things in his life was being a lifelong fan of the Dallas Cowboys and enjoyed the 90’s, with a never-ending positive outlook that they would bring home another Super Bowl win every year since! The Cowboys were always a topic of conversation. As a child he loved spending time in Bailey, NC with his paternal grandmother, Carrie Tant Chamblee, on her farm and helping her with daily farm chores. He also adored and appreciated the life-long care and support he received from his mother Hilda Marie Mullen, before her passing in June of 2014. He also enjoyed being a great Duke Basketball fan and watching these games with her. Roy is survived by his daughter, Michelle Ann Mullen, as well as his siblings, Kathy Jo Tetreault and Steven Wayne Mullen (Cheryl). He proudly leaves behind his granddaughter, Miranda S. Jack, who was a bright spot in his world, as well as several nieces, nephews, grandnieces and grandnephews. Funeral Notice: Funeral services for Mr. Roy M. Mullen will be private. In lieu of flowers, donations can be made to Veteran Services in care of the Dwyer Funeral Home, 776 North Street, Pittsfield, MA, 01201, in his memory. Donations CANNOT be made online, but may be made in care of the Dwyer Funeral Home.

Mr. Roy M. Mullen, 70, of Pittsfield, was called home to be with the Lord on Thursday, April 22, 2021. Born in Raleigh, NC, he was the first son of the late Roy Lee and Hilda Marie Tucker Mullen. Roy, who liked to go by Mike, was a Vietnam War... View Obituary & Service Information

The family of Mr. Roy M. Mullen created this Life Tributes page to make it easy to share your memories.

Send flowers to the Mullen family.