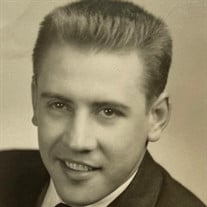 Samuel R. Dean, 87, passed away peacefully at BMC on Saturday, July 10, 2021. A native of Pittsfield, he was born on April 18, 1934, the son of Samuel and Julia Brombach Dean, and was educated in local schools. Sam served his country in the Army of the United States, in the 33D Armor Division and was honorable discharged in December of 1962. He often spoke of his time in Germany during his service. From there, he loved working on vehicles and worked as an auto mechanic throughout the city, including at Shapiro Motors, Joslin Dodge, and South Street Motors, until his retirement in 1999. Sam enjoyed many years of fishing and hunting, camping in different areas of New York and especially those trips every October in Lancaster, PA, enjoying the Amish land. He also enjoyed plowing during the winter, taking care of his home, and spending time with his family. Sam married his wife, the former Mary Fraley, on May 11, 1957. They shared 61 years of marriage before her passing on October 18, 2018. He leaves five children, Mary Beth Collins (Tim), Elizabeth Engels (Steve), Samuel Dean Jr., and the twins Mike and Mark. He also leaves his two grandchildren, Geoffrey Collins (Morgan), and Celina Collins along with several nieces and nephews. Sam was predeceased by his siblings, Doris Hogan, Eleanor Wolfer, Florence Belot, Evelyn Maces, and Robert Dean, Sr.. Funeral Notice: Funeral services for Mr. Samuel R. Dean will be Friday, July 16, 2021, with a Liturgy of Christian Burial at 11 a.m. at St. Charles Church, celebrated by the Rev. A. Peter Gregory, Pastor Emeritus. Entombment with full military honors will follow at St. Joseph Cemetery. In lieu of flowers, donations can be made to the American Lung Association or the American Cancer Society, in care of the Dwyer Funeral Home, 776 North Street, Pittsfield, MA 01201, in his memory. Donations CANNOT be made online, but may be made through the Dwyer Funeral Home.

Samuel R. Dean, 87, passed away peacefully at BMC on Saturday, July 10, 2021. A native of Pittsfield, he was born on April 18, 1934, the son of Samuel and Julia Brombach Dean, and was educated in local schools. Sam served his country in the... View Obituary & Service Information

The family of Mr. Samuel R. Dean, Sr. created this Life Tributes page to make it easy to share your memories.

Samuel R. Dean, 87, passed away peacefully at BMC on Saturday,...

Send flowers to the Dean, family.