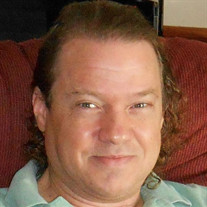 Scott Howard Bradley Cooper, 54, of Pittsfield, MA, passed away suddenly on June 22 due to complications related to his 5-decade-long battle with Type I diabetes. He was raised in Randolph, NJ, graduated from Cornell University in 1990 and, after several moves, settled in Pittsfield where he has lived for about 14 years. Scott’s interests were varied and many – he was an impressionistic painter at heart and in December, 2019, his talents on canvas as well as local wildlife photography were displayed at a gallery show at the Unitarian Universalist Church in Pittsfield, where he was a member. In addition to listening to and collecting many genres of music on both vinyl and CD, he was an accomplished electric bass guitar player, making occasional appearances at a local Open Mic/Stage venue. He also composed a piece of music which he recorded while being accompanied by one of his uncles on the drums. He had an intense thirst for knowledge, which led to his being an avid reader and an enthusiastic debater. Always sharp of wit and observation, Scott’s friends and fans regularly looked forward to his insightful commentary on social media, which was most often composed with his beloved feline buddy, Willow, by his side. He also embraced a keen interest in comparative religions. Scott worked as a Librarian Assistant in the Children’s Department of the Berkshire Athenaeum in Pittsfield where he was a much-appreciated employee for the last several years. Along the way, Scott displayed obvious personal courage as he struggled with various health issues starting in his early childhood through defeating colon cancer in 2017. Scott is survived by his beloved parents, both 1959 Pittsfield High graduates, Richard Craig Cooper (Barbara Sheridan) of NJ and Laurel Freund (Ken) of FL. He is also survived by his devoted brothers Jeff (Peg Shirra) of PA, and Ethan (Randi) and their sons Josh and Seth of VA, as well as extended family members and many, many friends. Funeral Notice: There are currently no services planned. Donations and tributes in Scott’s memory may be made to the American Diabetes Association, The Berkshire Athenaeum (1 Wendell Avenue, Pittsfield, MA 01201), or the Cat Room at the Pittsfield Humane Society (214 Barker Road, Pittsfield, MA 01201), where Willow is being well taken care of until her second-best home is found.

Scott Howard Bradley Cooper, 54, of Pittsfield, MA, passed away suddenly on June 22 due to complications related to his 5-decade-long battle with Type I diabetes. He was raised in Randolph, NJ, graduated from Cornell University in 1990 and,... View Obituary & Service Information

The family of Mr. Scott Howard Bradley Cooper created this Life Tributes page to make it easy to share your memories.

Send flowers to the Cooper family.