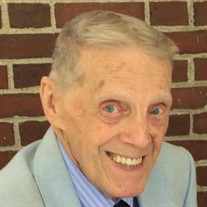 Mr. Serafin R. Garcia, 85, of Lee, passed away on Monday, May 10, 2021. Born in Pittsfield, MA, on January 17, 1936, the son of the late Sarafin and Gertrude Rodda Garcia, he graduated from Pittsfield High School. Shortly following graduation, in 1956, Serafin enlisted in the United States Air Force. He proudly served two years in Sacramento, CA and then another 2 in Japan before his honorable discharge in 1960. After his time in the military, Serafin was employed by General Electric, where he dedicated 29 ½ years. Among many things, Serafin enjoyed shooting a round of pool, playing a good game of cards with his friends, and making ceramics of all kinds. Country music always put a smile on his face. Serafin was a member of the Dalton American Legion as well as the Pittsfield Senior Center, where he was the Ceramics Director for over twenty years. Additionally, Serafin was a former member of St. Stephens Episcopal Church, and current member of the First Congregational Church of Dalton. Serafin was predeceased by his beloved wife of 36 years, the former Katherine Wilberding, whom he married on March 2, 1984. Katherine passed away on October 7, 2020. He is survived by his sister, Laura Brown, his grandsons, Shawn and Kevin Garcia and Carter Lyons, as well as his stepson, Douglas Lyons and two stepdaughters, Katherine and Jennifer Lyons. Serafin also leaves his niece and caregiver, Susan Borden, as well as several other dear nieces and nephews, and three great grandchildren. Besides his wife, Serafin was also predeceased by his son, Michael S. Garcia, his sisters, Mona Sperlonga and Delores Trzcinka, and his first wife, Carol Blessing. Funeral Notice: Funeral services for Mr. Serafin R. Garcia will be Saturday, June 5, 2021 at 11 a.m at the Unity Terrace at the Dwyer-Wellington Funeral Home, 220 East Street, Pittsfield MA 01201. Burial with full military honors will follow at Pittsfield Cemetery. There will be an hour of visitation prior to the service from 10 a.m. to 11 a.m. at the Dwyer-Wellington Funeral Home, 220 East Street, Pittsfield. In lieu of flowers, donations can be made to the Dalton American Legion in care of the Dwyer-Wellington Funeral Home, 220 East St, Pittsfield MA 01201, in his memory. Donations CANNOT be made online, but may be made through the Dwyer-Wellington Funeral Home.

Mr. Serafin R. Garcia, 85, of Lee, passed away on Monday, May 10, 2021. Born in Pittsfield, MA, on January 17, 1936, the son of the late Sarafin and Gertrude Rodda Garcia, he graduated from Pittsfield High School. Shortly following graduation,... View Obituary & Service Information

The family of Mr. Serafin R. Garcia created this Life Tributes page to make it easy to share your memories.

Send flowers to the Garcia family.