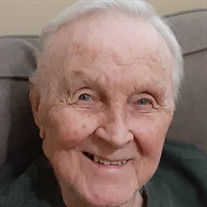 Mr. Stephen Stockley Jr., 90, formerly of Pittsfield, passed away at JGS Nursing Home in Longmeadow on July 19, 2021, following a brief illness. Born in Pittsfield on September 14, 1930, the son of Stephen Sr. and Janina Borkowski Stockley, he was a 1949 graduate of Pittsfield High School. After high school he served in the US Army during the Korean War. He worked for the United States Postal Service as a mail carrier, until his retirement. He was a member of the former Holy Family Church and had served as the President of the Polish Community Club. Stephen enjoyed watching his children and grandchildren plays sports, as well as playing golf and fishing. Stephen was predeceased by his wife the former Jean Mendel. He is survived by his children Mike Stockley (wife Sherry), Paul Stockley (wife Suzanne), Lynn Stockley, grandchildren Lindsay Swenson (husband Nils), Matthew Stockley, Cullen Stockley, and Jillian Stockley and his longtime partner Patricia Wadas. He was predeceased by a granddaughter Tianna Stockley. Graveside services with Military Honors for Mr. Stephen Stockley Jr. will be held Tuesday, July 27, 2021, at 2pm with Msgr. Michael A. Shershanovich, officiating at St. Josephs Cemetery in Pittsfield. Friends who wish to attend are asked to meet inside the cemetery gates at 1:45PM. In lieu of flowers, donations are suggested to the Wounded Warrior Project, in care of the Dwyer Funeral Home, 776 North Street., Pittsfield, MA 01201 in his memory. Donations CANNOT be made online but may be made through the Dwyer Funeral Home.

The family of Mr. Stephen Stockley Jr. created this Life Tributes page to make it easy to share your memories.

Send flowers to the Stockley family.