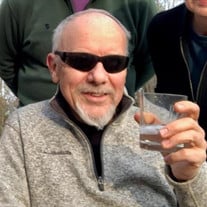 Terrence W Meacock of Canaan, NY passed away on August 3, 2021 after a brave battle with leukemia. Born in Croydon, England on January 25, 1952, the son of the late William Meacock and Mary Meacock who survives him. He graduated from secondary school and college in England. Terrence had a successful career as a publishing executive in England and the United States which he moved to in 1986 to marry his beloved wife Mai Keklak, who survives him. A homeowner in Canaan NY since 1987, and full time resident since 2014, he was never happier than when he was kayaking, biking, hiking or skiing in the Berkshires. A man of many talents and interests, he was a skilled renovator of antique cars, tractors and historic homes. Together with his wife Mai, he recently restored a large home in Canaan, NY. Terrence became a U.S. citizen on July 4, 2017 and was extremely proud of his son Justin, and particularly Justin’s service in the U.S. Navy. In addition to his Mother Mary, his wife Mai and his son Justin, he is survived by his brother and sister-in- law Tony and Theresa Meacock of Oxford, England and their children Samuel and Charlotte and three great- nieces and one great nephew. He is also survived by his sisters-in-law Michele Gale of Asheville NC and Moneen Keklak of Sussex County, NJ. The family want to thank the staff of Montefiore Hospital (Bronx, NY) and BMC for their compassionate and dedicated care, particularly in Terrence’s final days. Funeral Notice: Terrence’s family is planning a memorial in the spring of 2022 in Canaan NY. Further details will be posted here in due course. In lieu of flowers, donations can be made directly to http://www.montefiore.org/giving , specfically for Dr. Braunschweig's CAR-T Leukemia Research.

Terrence W Meacock of Canaan, NY passed away on August 3, 2021 after a brave battle with leukemia. Born in Croydon, England on January 25, 1952, the son of the late William Meacock and Mary Meacock who survives him. He graduated from secondary... View Obituary & Service Information

The family of Mr. Terrence W. Meacock created this Life Tributes page to make it easy to share your memories.

Send flowers to the Meacock family.