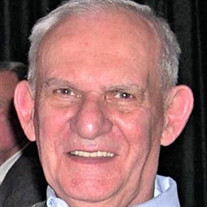 Thomas Francis Kushi Jr., a perfect gentleman and devoted family man. Tom Kushi, 84, of Pittsfield, Massachusetts peacefully passed away on January 16, 2021 in the great care of The Landing at Laurel Lake. Tom was born in Pittsfield on February 18, 1936, the son of Thomas Kushi Sr. and Dorothy Grenier Kushi. He valued education, attending Cranwell Preparatory School and graduating from St. Joseph’s High School in 1954. Tom then served in the United States Air Force for four years as an air traffic controller. He loved the team camaraderie and cherished his time spent serving in beautiful Newfoundland. After the Air Force, Tom came home to help run the business that his father founded, Moldmaster Engineering. He then met and married the love of his life, Lorraine. By appearance alone, Tom might not seem like an outdoor enthusiast, but he was quite a thrill seeker. His passion was flying. Tom would fly his Piper Cherokee plane around New England for business trips and pleasure. He would think nothing of flying to Nantucket with his family for a day at the beach. Tom was also an avid skier. He’d frequent the local slopes and even skied in Austria and Italy. During the summer months, you would find Tom riding his Harley on weekends and he once cruised all the way to Milwaukee in the rain. Tom also enjoyed golfing. He loved his local Wednesday and Friday night golf leagues, as well as his unforgettable rounds in Ireland. Tom was a man of many talents, most of them were self-taught as a passionate and avid reader. Tom was an exceptional leader. He held the reins at work, as the President of Moldmaster Engineering for over 50 years. He held his family on his shoulders, as a supportive and loving son, brother, husband, father, uncle, grandfather and great grandfather. He held his wife’s hands through it all – the toasts, the dancing, motorcycle spins and plane rides, her illness, and her thrill for life. Tom was loyal, reliable, and hardworking with a quirky sense of humor and an impressive ability to fall asleep at a moment’s notice. He had a diverse fashion sense – from suave suits down the shop to a white tee and blue jeans (his standard chef’s outfit) at family gatherings. Tom loved to host all of the holidays. He would tell you he wanted peace and quiet but would be found snickering at chaotic family get-togethers and pretty much anything Lorraine did. Tom was the ultimate class act who took care of everyone around him, no questions asked. Most of all, Tom loved his family. Although he had a behind-the-scenes style, his biggest joy in life was helping his loved ones. Tom will always be remembered as a kind-hearted Gentleman. Tom leaves his three children, Karen Quinn and her husband Ed, Kathleen Righini and her husband Steve, Tom Kushi III and his wife Carmel. He also leaves his six grandchildren, Marissa Quinn, Ashlee Quinn, Stephen Righini, Gina Righini, Shane Kushi and Oliver Kushi, and his two great grand-children Aiden and Adrianna Conner. He is also survived by his brother Kevin and wife Jean, his sister-in-law Ellen Kushi, Debra and Michael Purcell, and many nieces and nephews. Tom was predeceased by his sister, Dorothy “Honey” Chiorgno and his brother Timothy Kushi. He is now reunited with his forever love, Lorraine, who passed away in 2016. The family would like to extend their deep and sincere gratitude to the staff at The Landing at Laurel Lake who took extra special care of him and treated him as if he was part of their own family. A special thanks goes out to HospiceCare in the Berkshires for their support during this difficult time. Funeral notice: A private service will be held in memory of Mr. Thomas F. Kushi Jr. at Dwyer Funeral Home followed by burial at St. Joseph’s Cemetery. In lieu of flowers, the family would ask for donations to be made to the Multiple Sclerosis Foundation in honor of Lorraine Kushi or the Boys & Girls Club, in care of the Dwyer Funeral Home, 776 North Street, Pittsfield MA 01201. Donations CANNOT be made online, but may be made through the Dwyer Funeral Home.

Thomas Francis Kushi Jr., a perfect gentleman and devoted family man. Tom Kushi, 84, of Pittsfield, Massachusetts peacefully passed away on January 16, 2021 in the great care of The Landing at Laurel Lake. Tom was born in Pittsfield on February... View Obituary & Service Information

The family of Mr. Thomas Francis Kushi, Jr. created this Life Tributes page to make it easy to share your memories.

Send flowers to the Kushi, family.