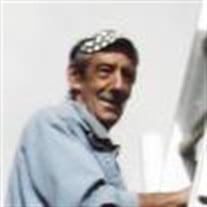 Mr. Thomas D. Volin, 70, of Lanesborough, passed away on Sunday, February 24, 2019 at Berkshire Medical Center. Born in Pittsfield on April 18, 1948 the son of Leon and Doris Brennan Volin, he was a 1967 graduate of Pittsfield High School. Tom started his career at General Electric in Pittsfield in 1969 and worked in numerous departments throughout his employment. He retired in 2005 after many years of service. Tom was an accomplished carpenter and painter. One of his passions was renovating and making constant improvements to every house he lived in. He also enjoyed classic cars, especially his El Camino’s. You could always spot Tom by the trademark polka dot hat that he always wore. Most of all, Tom was always there for others, he had a big heart and was always willing to help those in need. Tom is survived by the Love of his Life, Judy Volin, whom he married on December 29, 1991 in Pittsfield. He also leaves his cousins, Donna Trudeau, Jim Bazinet and Barbara Johnson and also his beloved dog, Gia. Additional survivors include another daughter and a sister. He was predeceased by his parents Leon and Doris Brennan Volin, his brother William, who passed away in 1991 and his precious daughter, Kim, whom he adored, who passed away in 1980. Tom’s family would like to thank their extended family and numerous friends for the love and support they have shown through this difficult time. Funeral Notice: In keeping with Tom’s wishes, there will be a reception at The Old Forge Restaurant, 125 N Main St., Lanesborough on Saturday, March 9, 2019 at noon. In lieu of flowers, donations can be made to St. Jude Children’s Research Hospital, the Lanesborough Volunteer Fire Dept. or the Berkshire Humane Society, in care of the Dwyer Funeral Home, 776 North St., Pittsfield, MA 01201 in his memory. A private burial is planned for a later date. DONATIONS CANNOT BE MADE ONLINE, but may be made through the Dwyer Funeral Home.

Mr. Thomas D. Volin, 70, of Lanesborough, passed away on Sunday, February 24, 2019 at Berkshire Medical Center. Born in Pittsfield on April 18, 1948 the son of Leon and Doris Brennan Volin, he was a 1967 graduate of Pittsfield High School.... View Obituary & Service Information

The family of Mr. Thomas D. Volin created this Life Tributes page to make it easy to share your memories.

Send flowers to the Volin family.