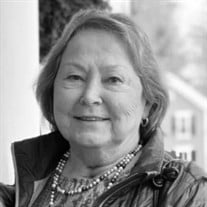 Ursula Lopenzina passed away peacefully on the evening of Tuesday July 20th. She is survived by her husband Gary Lopenzina and her three sons, Peter, Drew, and Douglas. Ursula was born in the town of Straubing in the Bavaria region of Germany in 1938. She was a child of the Second World War and knew deprivation and hunger in her youth-things she rarely talked about but that became known to her family over time. She met her husband Gary at a dance held for American servicemen stationed in Straubing in 1958. They fell in love, were married in an ancient cathedral in the old village in 1959, and after living for a year in Germany they came to the states, Gary having finished his stint with the 11th Armored Cavalry. In 1969 Gary and Ursula moved from their home in Long Island, NY to Pittsfield where they remained the rest of her life. She raised her three sons while also attending night classes at BCC, and in 1973 she was accepted into Williams College where she was among the first class of women ever to attend the school and the first mother to ever graduate, earning her degree in foreign languages, magna cum laude. When Gary left his job as publisher at Morgan Grampion in 1981 to start a new career as owner of the local office supplies retailer, Gowdy Shandoff's, Ursula assumed the role of bookkeeper for the firm, learning quickly on the job. In all things she was capable, smart, pragmatic, and compassionate, always willing to do whatever was needed to help support her family. Ursula was loved by everyone who knew her. Her home was a center of activity where visitors were made to feel welcome and all remembered the elaborate meals she would prepare. Nobody ever left hungry. Her childhood taught her to be tough and frugal when necessary, but she was also generous with her affections and was always there when anyone needed her. She was physically active most of her life and loved to play tennis, golf, paddleball, and bridge at the Pittsfield Country Club. We know she has many friends there who will deeply mourn her passing. She also loved to garden, had a seemingly effortless green thumb, and was a quick study in every challenge confronting her, whether it was knitting a wool sweater or changing a flat tire. There is a special kind of hospitality, possessed by few, that immediately makes everyone in their sphere feel cared for, respected, and welcomed at the table. This was certainly felt by all her extended family, her daughters-in-law who loved her like their own mother, her grandchildren, Dylan, Amelia, Nick, Chelsea, and Joshua, for whom she was always available as a caretaker with unflagging love and energy, and for too many friends, acquaintances and guests to count. On the Fourth of July of this year her entire extended family came to visit, celebrating our first get together after a year and a half of Covid restrictions. She had a wonderful time, surrounded by three generations of family who all pitched in to perform the labor of planning and preparing that she had always handled on her own in the past but could no longer perform. She was also at home with family when she passed on the 20th. She was eighty-two years old. Her family is bereft at her passing, knowing that the center has been taken from their home and their lives. But they are also firm in their love and support of one another and leave this memorial for others to remember her by. There will be a private service for family and friends sometime in the next two weeks.

Ursula Lopenzina passed away peacefully on the evening of Tuesday July 20th. She is survived by her husband Gary Lopenzina and her three sons, Peter, Drew, and Douglas. Ursula was born in the town of Straubing in the Bavaria region of Germany... View Obituary & Service Information

The family of Mrs. Ursula Lopenzina created this Life Tributes page to make it easy to share your memories.

Ursula Lopenzina passed away peacefully on the evening of Tuesday...

Send flowers to the Lopenzina family.