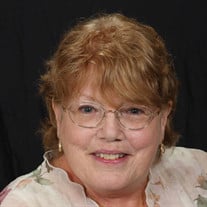 Mrs. Virginia “Ginny” H. Markham, 73, of Pittsfield, passed away on Wednesday, January 29, 2020, after a long battle with a terminal illness. Born in St. Louis, MO, on December 1, 1946, she was the was daughter of the late Charles and Faith Mulligan Tille. Ginny worked as a salesclerk for Zayres and Kmart for much of her career. Virginia was a longtime member of the Auxiliary American Legion, where she had recently transferred to the local Pittsfield Chapter. She was a communicant of Sacred Heart church. Ginny had many passions, among some being handcrafts, sewing, and doll house construction. Besides her beloved husband of 54 years, Edwin Markham, Jr., whom she married on June 18, 1965, Virginia is survived by her three sons, Andrew Markham, Edwin Markham III and Charles Markham. She leaves behind her three siblings, Charles Tille, Faith Snyder and Alice Hutchinson. Ginny is also survived by three grandchildren, Wyatt, Josie and Travis, and many dear nieces and nephews. She was predeceased by her brother, Donald Tille. Virginia was a spirited individual who was loved by all. She will be greatly missed, but will always live on through the memories of all those she has touched. Funeral Notice: Funeral services for Mrs. Virginia H. Markham will be Thursday, February 6, 2020 with a Liturgy of Christian Burial at 11 a.m. at Sacred Heart Church, celebrated by the Rev. Frank Lawlor. Burial will follow in St. Bridget Cemetery in Housatonic, MA.. Calling hours will be Wednesday, February 5, 2020 from 4 p.m. until 7 p.m. at the Dwyer Funeral Home. In lieu of flowers, donations can be made to the Berkshire Visiting Nurse Association in care of the Dwyer Funeral Home, 776 North St., Pittsfield, MA 01201 in her memory. Donations CANNOT be made online, but may be made through the Dwyer Funeral Home.

The family of Mrs. Virginia "Ginny" H. Markham created this Life Tributes page to make it easy to share your memories.

Send flowers to the Markham family.