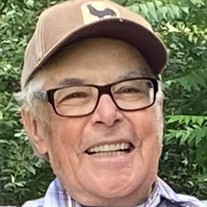 Mr. Wayne R. Dawson, 79, of Hinsdale, passed away on Wednesday, August 26, 2020. Born in Pittsfield, MA, on November 13, 1940, he was the son of the late Ralph and Ann Yarmey Dawson. He graduated from the University of Denver in 1965 with his Bachelor’s degree in finance. Prior to his time at the University of Denver, Wayne enlisted in the United States Air Force, where he proudly served his country from 1959 until 1961. Wayne worked as a distributor for Arnold Bread, Little Debbie Snacks, and Archway Cookies most of his life, retiring in 2000. While he worked for different snack food companies, Wayne had a passion for healthy eating and a holistic approach to life. After his retirement, he raised over 300 chicken and became an egg farmer. In his spare time, Wayne enjoyed horseback riding, especially with his Horse Max, as well as woodworking in his shop and exploring back roads on his motorcycle. Additionally, he loved to travel the globe, and always stressed to others the importance of doing so. Besides his daughter, Wendy Kowalczyk (Dave), Wayne is survived by three stepdaughters, Patricia Brandi, Rosalee Lampro (Jimmy), and Nancy Nichols (Joe). He leaves behind his granddaughters, Madelyne (Taylor) and Allyson Kowalczyk as well as multiple step grandchildren and great grandchildren. Funeral Notice: There will be no formal funeral services for Mr. Wayne R. Dawson. As he would say, “Let’s skip the hokey pokey—I don’t want a pity party.” In lieu of flowers, donations can be made to The Berkshire Humane Society or HospiceCare in the Berkshires in care of the Dwyer Funeral Home, 776 North St., Pittsfield, MA 01201 in his memory. Donations CANNOT be made online, but may be made through the Dwyer Funeral Home.

Mr. Wayne R. Dawson, 79, of Hinsdale, passed away on Wednesday, August 26, 2020. Born in Pittsfield, MA, on November 13, 1940, he was the son of the late Ralph and Ann Yarmey Dawson. He graduated from the University of Denver in 1965 with his... View Obituary & Service Information

The family of Mr. Wayne R. Dawson created this Life Tributes page to make it easy to share your memories.

Send flowers to the Dawson family.