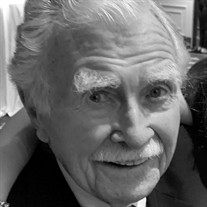 William Arthur Godfrey, Jr., known as Bill, a longtime resident of Pittsfield, MA, passed away peacefully in his sleep on Friday, September 11, 2020, at the age of 92. Since May this year, Bill has been happily living in Princeton, NJ with... View Obituary & Service Information

The family of Mr. William "Bill" A. Godfrey, Jr. created this Life Tributes page to make it easy to share your memories.

Send flowers to the Godfrey, family.