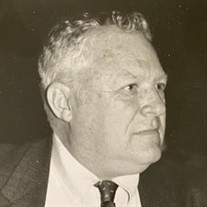 William James Dunham, 90, of Pittsfield, MA, passed away on Friday, May 7, 2021 at Berkshire Medical Center. He was born in the city of Pittsfield on October 31, 1930 and resided at 21 Spadina Parkway most of his life. Born to Arlo H. W. Dunham and E. Elizabeth O’Brien Dunham, he was the oldest of four sons. He was educated in the Pittsfield school system and went on later in life to earn a degree in Business Administration from the former North Adams State. With pride he served his country as an Army soldier. Many of his “war stories” focused on the bases in Austria where he served as a postmaster. On leave, he visited many European countries and photographed his experiences. Mr. May trained him to be a machinist and he was hired by General Electric. He continued to sharpen his skill at Pratt and Whitney in the Harford area, but later decided to return to Pittsfield. He met and married Anne-Marie Levesque Dunham in the 1960’s, returned to Spadina Parkway, and worked in the construction trades. He ended his career as a vocational teacher, teaching in Sheffield, MA and in Bennington, VT. Ill health forced his retirement. In his free time, he hunted in season and fished in area streams. He enjoyed the waters of the Housatonic River. He played golf (weather-permitting), and worked on automobiles as well as machinery and household appliances. He loved to “tinker” and spent time working on home projects. William supported the Red Sox through the baseball seasons and organized his days around their game schedules. He was a terrific cheerleader for many of the team players. William leaves his wife, Anne, and his two sons, Paul and Peter. He leaves his grandchildren, Drew, Cece and Tommy, and Caleb, Finn, Willa and Sawyer. He is also survived by his brother, Richard (Dick) in Dalton, the family of James Dunham who resides in Connecticut, and a younger brother, John. Funeral Notice: Calling hours for Mr. William James Dunham will be Friday, May 14, 2021, from 4 p.m. until 6 p.m. at the Dwyer Funeral Home, 776 North Street, Pittsfield MA 01201. In lieu of flowers, donations can be made to Dana Farber in care of the Dwyer Funeral Home, in his memory. Donations CANNOT be made online, but may be made through the Dwyer Funeral Home.

William James Dunham, 90, of Pittsfield, MA, passed away on Friday, May 7, 2021 at Berkshire Medical Center. He was born in the city of Pittsfield on October 31, 1930 and resided at 21 Spadina Parkway most of his life. Born to Arlo H. W. Dunham... View Obituary & Service Information

The family of Mr. William J. Dunham created this Life Tributes page to make it easy to share your memories.

William James Dunham, 90, of Pittsfield, MA, passed away on Friday,...

Send flowers to the Dunham family.