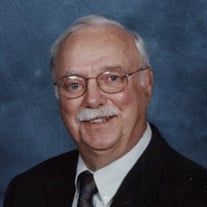 Mr. William P. Shelsy, of Pittsfield, passed away on Tuesday, August 20, 2019. Born in Pittsfield, MA, on October 3, 1936, the son of the late Patrick and Mary Resse Shelsy, he graduated from St. Joseph Central High School in 1955 and also attended St. Michael’s College in Vermont. Bill worked for the Berkshire Eagle and was the Circulation Director for Miller Newspapers for 27 years. He was also the owner and operator of Shelsy’s Restaurant in Lanesborough for 15 years. Bill was very active in his community. He was a member of the Knights of Columbus, and a member and past President of the New England Association of Circulation Executives. He was a member of the Pittsfield Licensing Board and was on the Pittsfield Bicentennial Commission. Besides his beloved wife, Marie Hurley Shelsy, whom he married on August 12, 1961, Bill is survived by his daughters; Christine Pratte (Ric) of Bedford, NH., Terri Clark of Scotia, NY, Tracie Shelsy of Pittsfield, MA; and his son, Eric Shelsy (Jennifer) of Lanesborough, MA. Bill also leaves behind nine adored grandchildren; Laine and Paige Chiaretta, Carly and Catherine Clark, McKensie Saldo, and Courtney, Jackson, Katherine, and Jacob Shelsy. Bill also enjoyed watching endless hours of TV, especially when the Red Sox were on. He enjoyed golfing at “The Hills,” vacationing at the beach, and dancing polka with his daughters and granddaughters. Bill was known for his voracious appetite – he loved Italian food, cooking and his chocolate ice cream (or… anything chocolate at all). Along with cooking he enjoyed making homemade dandelion wine and grappa for his friends; partying and entertaining were his favorite pastimes. He was a devoted and loving husband, father and grandfather. The family would like to thank his Hospice nurse Carm and the staff at Craneville Place who are truly angels on earth. Funeral Notice: Funeral services for Mr. William P. Shelsy will be Saturday, August 24, 2019, at 8 a.m. from the Dwyer Funeral Home with a Liturgy of Christian Burial at 9 a.m. at St. Agnes Church, celebrated by the Rev. Christopher Malatesta, Pastor. Burial will follow in St. Joseph Cemetery. Calling hours will be Friday afternoon, August 23, 2019, from 4 p.m. to 7 p.m. at the Dwyer Funeral Home. In lieu of flowers, donations can be made to Susan Kellar, Craneville Recreation Fund in care of the Dwyer Funeral Home, 776 North St., Pittsfield, MA 01201 in his memory. Donations CANNOT be made online, but may be made through the Dwyer Funeral Home.

Mr. William P. Shelsy, of Pittsfield, passed away on Tuesday, August 20, 2019. Born in Pittsfield, MA, on October 3, 1936, the son of the late Patrick and Mary Resse Shelsy, he graduated from St. Joseph Central High School in 1955 and also attended... View Obituary & Service Information

The family of William P. Shelsy created this Life Tributes page to make it easy to share your memories.

Mr. William P. Shelsy, of Pittsfield, passed away on Tuesday,...

Send flowers to the Shelsy family.