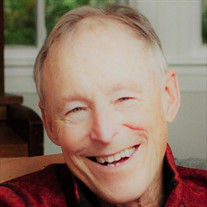 PITTSFIELD - William E. “Bill” Tobin, 73, artist and educator, passed away October 7, 2021 at the Gale Avenue home he built after a brave, eight-year fight with prostate cancer. Born April 25, 1948 to Francis J. and Mary Ida (Moore) Tobin, Bill was one of seven children to grace their raucous 92 Seymour Street home that was always loudly filled with generations of family and friends and the origins of his love for the July 4th holiday. An avid mountain bike enthusiast, hiker and overall explorer, Bill was always quick to go off the beaten path and never missed a chance to take the more scenic route home. The husband of Eileen (Wolfe) Tobin, Bill was a fantastic dad, adored grandfather and wonderful brother and loving uncle who will be greatly missed by his family and countless friends that were lucky enough to cross his path. A member of the St. Joseph’s High School Class of 1966, Bill graduated from American International College with a BA in Chemistry in 1971 and received his Master of Education from Lesley University. Soon thereafter, Bill began his 35-year career in education, teaching chemistry and geology at North Jr. High and Pittsfield High School, where he was also the PHS head swim coach from 1975 -1982 and again in 1992-1993. Bill also served as the president of The United Educators of Pittsfield (UEP), the union that represents Pittsfield Public School teachers from 1996 - 1999. Upon his retirement for the Pittsfield School system in 2006, Bill taught part-time for three years at Lenox Memorial High School. Having spent countless hours there as a kid, Bill also worked for over forty years at the Pittsfield Boys & Girls Club as a staff member and swim team coach on Melville Street and as the waterfront director at Camp Russell. At Camp, whether working or volunteering their time to help improve the place, he was fortunate to spend many summers on Richmond Pond along with a cast of characters who he adored and shared stories with that lasted a lifetime. Whether a student or a camper, Bill never forgot a face or name. He could recite stories about kids he had in class and at camp at will, no matter if he had them in his first-year or his last. It was a truly remarkable trait. After retiring from teaching, Bill found his true calling as an artist, dealing primarily in sculpture and metal work. A member of the confederation of comrades called Group W, an artist’s collaborative who shared enthusiasm and workspace generously provided by the tolerant souls of the Melle family at East Coast Refinishing, Bill’s works have been featured in exhibits and galleries across the Northeast with sculptures recently featured at The Mount in Lenox, Three Sisters Sanctuary in Goshen and Peconic Landing in Greenpoint, NY. In addition to his wife, Eileen, who he married on November 11, 1972, Bill is survived by his three children, their spouses and his seven grandchildren, who absolutely treasured their grandpa. Joshua Tobin, wife Kari and their children, Molly and Cameron of Dedham, Nicole and her husband, Jacques Goupil and their children, Sebastian, Jonah and Caleb of Newton; Jonathan Tobin, wife Kristen and their children, Kensington and William (named after his grandfather) of Needham. Besides nieces and nephews too numerous to mention, Bill also leaves behind his Seymour Street clan; his sister, Mary Downing and husband Jack of Pittsfield; his sister, Bernadette Clay and husband Mike of Cheshire; his brother, Jay Tobin and wife Lois of Pittsfield; his brother, Ben Tobin and wife Beth of Charlton; his brother, Chris Tobin and wife Nancy Carson of Culver City, CA; his brother, Roger Azar of Pittsfield and his sister-in-law, Lisa Tobin of Tempe, AZ. Bill was pre-deceased in 2014 by his beloved, older brother, F.X. Tobin who he never stopped looking up to. Funeral Notice: Calling hours for Mr. William E. "Bill" Tobin will be Friday, November 19, 2021, from 4 p.m. to 6 p.m. at the Dwyer-Wellington Funeral Home, 220 East Street, Pittsfield, MA 01201. To best ensure everybody's health, due to the recent rise in Covid cases, all who attend these service will be required to wear face makes. In lieu of flowers, donations may be made in Bill’s memory to; Hospice Care in The Berkshires in honor of everyone who took such great care of Bill as well as the Berkshire Natural Resources Council to help preserve the natural beauty of the Berkshires, of which Bill thoroughly enjoyed, in care of the Dwyer Funeral Home.

The family of Mr. William "Bill" Tobin created this Life Tributes page to make it easy to share your memories.

Send flowers to the Tobin family.