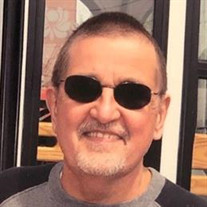 William F. Wheeler, Sr., a man who never used obstacles as an excuse to stop him from doing the right thing, passed away on the morning of July 1, 2019 due to complications after several years of illness. Born on March 5, 1948, he spent his formative years in Pittsfield, MA. At the age of 14 Bill, Sr. took steps to find a better life for himself by leaving home. He found his way to West Warwick, RI and worked on a horse farm under the loving care of Etta and Johnny “Mustache” Carello. In 1968 Bill, Sr. enlisted in the United States Army. Working with the Army Corps of Engineers, he served two tours in Vietnam between 1968-1970 earning his National Defense Service Medal, Vietnam Service Medal with 5 Campaign Stars, Vietnam Campaign Medal, 3 Overseas Bars, Sharpshooter Badge (M-14) and Expert Badge (M-16). During his post war years he used the skills he learned in the Army working for the Unistress Corporation and then trained to become a machinist. He then worked for the next 37 years at O.W. Landergren, officially retiring in 2018. Big Bill never hesitated to help his friends and neighbors to build a deck, paint a house, landscape, take a tree down, or shovel snow after a full day at the metal shop. In 1974 Bill met the love of his life, Mary Herman, and they married in 1976. With Mary he was able to find a family that would care for him as much as he did for them, especially with his father-in-law Bill “Red” Herman. With Mary they took countless trips to the beaches of Rhode Island and Lake George with Mary’s siblings Matthew and Theresa Herman, and later with their two children Billy, Jr. and Jessy. Years later as he was affectionately referred to as Grampy, he took great care and boasted pridefully of the accomplishments of his children, his daughter-in-law Suzy, grandchildren Nathan, George, and Maggie as well as the family dog Brady. Anything that Bill, Sr. did he did it will expertise and passion. He never hesitated to give a helping hand, a shoulder to cry on, a breath mint, handkerchief, or a white towel. Bill was predeceased by his sister Judy Wheeler Lise and father-in-law Bill Herman, Sr. Bill is survived by his wife Mary, children Billy, Jr. and Jessy, daughter-in-law Suzy, grandchildren Nathan, George, and Maggie, mother-in-law Kathy, sisters-in-law Theresa, Mary Gay and Lisa, brothers-in-law Billy, Michael, Pat, Matthew, Mark and Chris as well as numerous nieces and nephews. Funeral Notice: Funeral services for Mr. William Wheeler will be Monday, July 8, 2019 at 9 a.m. from Dwyer Funeral Home with a Liturgy of Christian Burial at 10 am at St. Charles Church, celebrated by the Rev. John Tuohey, Administrator. Burial will follow in St. Joseph Cemetery. Calling hours will be Sunday afternoon, July 7, 2019, from 1 p.m to 3 p.m.. Because of Grampy’s generosity of spirit, in lieu of flowers, donations can be made to the Salvation Army of Pittsfield in care of the Dwyer Funeral Home, 776 North St., Pittsfield, MA 01201 in his memory. Donations CANNOT be made online, but may be made through Dwyer Funeral Home.

William F. Wheeler, Sr., a man who never used obstacles as an excuse to stop him from doing the right thing, passed away on the morning of July 1, 2019 due to complications after several years of illness. Born on March 5, 1948, he spent his... View Obituary & Service Information

The family of Mr. William F. Wheeler Sr. created this Life Tributes page to make it easy to share your memories.

William F. Wheeler, Sr., a man who never used obstacles as an...

Send flowers to the Wheeler family.