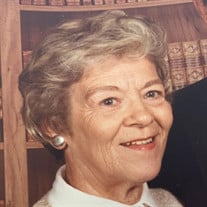 Polly Hopkins Grieve was born on March 1, 1920, in Bridgeport, CT. She came to Pittsfield as an infant with her mother, Carolyn Cande Hopkins, and her brother, Robert. They lived on South Street with her grandparents, aunt, and a great-grandmother. Those were the days that turned into some of her most cherished memories—playing around Wampeenum Brook and attending Morewood, the one-room schoolhouse on South Mountain Road. She learned proper posture and poetry at Redfield School and about a hundred songs at her beloved Camp Witawentin. These verses never left her, and we were awestruck by her impromptu recitations. About a month before her death, she woke up reciting the last verse of “Thanatopsis.” Her favorite school years were at Central Junior High. She graduated from Pittsfield High School with the class of 1937, having been deemed by yearbook consensus “best girl actor” and “most beautiful girl.” Polly was a teller at the Pittsfield Cooperative Bank when it was situated in the rear of the Aggie Bank Building facing the old post office, now City Hall. She later worked for Henderson, Brennan & Reder as a legal secretary. In 1942 she married Alan Blake Grieve, and they raised three children: Tom, Cande, and Laurie. Following in the footsteps of her grandmother, Carrie Cande, she attended South Congregational Church, sang in the choir, and joined with the Ladies’ Benevolent Society for some excellent sewing, quilting, and comradery. Alan died in 2013, and Polly spent the last six years of her life at home with Cande. Kindness was her modus vivendi. She died at age 99 of a heart attack on December 16, 2019. Polly is survived by her children: Thomas A. Grieve and his wife, Kathleen Conry Grieve, of Arlington, TX; Cande Grieve of Pittsfield; and Laurie Norris of Southern Pines, NC; three grandchildren and eight great-grandchildren: Timothy Grieve and his wife, Hollie, and their children Abbie, Emilie, and Ellie, of New Braunfels, TX; Benjamin Grieve, his wife, Kathy, and their children Bode, Kaia, and Barrett, of La Jolla, CA; Katherine Ann Danzi, her husband Jay, and their children Thomas and Sam, of Ft. Worth, TX; her nephews and their wives: Craig and Pat Hurry Wilder of Falmouth, MA; Richard Wilder of Wellesley, MA, and Elizabeth Banks of Bristol, CT; the Lewis Family relatives of North Stonington, CT; and the Cande Family relatives of Dalton, MA. Funeral Notice: Services have yet to be arranged. Donations in her memory may be made to the Ladies’ Benevolent Society of South Congregational Church in care of Dwyer-Wellington Funeral Home, 776 North St., Pittsfield, MA. 01201. Donations CANNOT be made online, but may be made through the Dwyer-Wellington Funeral Home.

Polly Hopkins Grieve was born on March 1, 1920, in Bridgeport, CT. She came to Pittsfield as an infant with her mother, Carolyn Cande Hopkins, and her brother, Robert. They lived on South Street with her grandparents, aunt, and a great-grandmother.... View Obituary & Service Information

The family of Polly Hopkins Grieve created this Life Tributes page to make it easy to share your memories.

Send flowers to the Grieve family.